BEYOND - Life at the Lodge

Spending a day immersed in nature restores us, but it can also be overwhelming to the senses. So when you return to the lodge each night, you need your creature comforts taken care of. When you join us in the lodge after a day's adventure, it's like returning to a little outpost of civilization in the middle of nowhere.

It's a time to sit around the table and share stories with other travelers. It's an inimate gathering where we eat and drink and relax, sharing food that was raised right here on the land and prepared in our own gourmet kitchen, along with fish and game and fresh-baked bread.

Each day we share adventures in the wilderness, flying and seeing and touching and doing things together that we never imagined. But it may be at the dinner table, each night -- when guests and family come together to share stories -- that each of us truly becomes a part of the ongoing story of Ultima Thule.

Alaska Ski Tour in the Wood-Tikchik

Derek Collins and I skied from Aniak to Dillingham through Wood-Tikchik State Park (Alaska). Our route was 250 miles, and it took us 14 days. The highlight of the trip was ice skating ~50 miles of the route on nordic skates. We were stomped by a storm the entire second week.

Earlier this winter Joe Stock proposed we do a fly-in ski traverse of the Wood-Tikchik mountains in Southwest Alaska. The Wood-Tikchiks are a freshwater fjord system, big mountains to the west, U-shaped glacial valleys (the lakes), and rolling hills (moraine) to the east. I was really excited to do another trip with Joe because I can learn so much from him. After scoping the area in Google Earth, I was really impressed with the 4000-ft relief, granitic and glaciated, at the northern end of the mountains, so I proposed we fly in for steep skiing, then tour out to Dillingham. At the last minute Joe had to bail, and without him there was no funding to fly in.

I met Derek Collins a few years ago when he came to the Brooks Range for the Winter Classic. We didn't travel together, but Thomas Bailly and Roman Dial were really impressed with him. Early in the course Roman borrowed one of Derek's ski poles and accidentally broke it. Derek just shrugged it off. Since hearing that, I've invited him on a number of trips, but living in Jackson Hole with two kids, he hasn't been able to make other trips.

Derek was particularly interested in this route because he spent 6 years growing up in Aleknagik, the village at the southern end of the Wood-Tikchik lakes, and Dillingham. We discovered an almost spooky number of similarities. Derek moved to Aleknagik at age 4, from Salmon, Idaho. I moved to McGrath (up the Kuskokwim River from Aniak) at age 4, from Missoula. He moved into Anchorage for 4th grade, I moved in for 8th. We are both quiet, a little socially awkward, and uncomfortable with the party scene. It gets even weirder... our older brothers, Dirk and Burke, are both pro videographers. Dirk was a co-founded of TGR, now sole owner of One Eyed Bird, and Burke has Things to Look At. It was fun thinking of what project they would put together... Girls Gone Wilderness?

Last year, Alaska saw some pretty warm days. If we compare to a few season's past - REALLY REALLY WARM! These guides took advantage of their day off with a little ingenuity, duct tape and probably beer. The board looks like scrap or plywood. Anyway, we've never seen anything like it.

Some incredible Alaska caribou footage from Golden Eagle Outfitters out of Kotzebue. North West Arctic Caribou here during the aggregation... estimated around 170,000+ animals in one group. This is has the "Planet Earth" wow factor. What I would give to see this in person.

As the mosquitoes emerge in late June and early July, the caribou gather into enormous post-calving aggregations, sometimes numbering in the tens of thousands. For example, in 1987, over 93,000 caribou assembled in one group south of Camden Bay. The caribou seek areas where breezes and cooler temperatures reduce the harassment by mosquitoes, and when there is no wind, the caribou move continually. Cold winds offer relief from the mosquitoes and permit the caribou to rest and feed freely.

The Meaning of Wild - Trailer

This film falls right in our wheel house. Why do we need wild as human beings? What does wilderness really mean, and is it important? Great to revisit these questions and the concept of wild. There is some incredible video of Alaska. Needless to say, we are looking forward to this film very much.

Rent or Purchase the film here!

Alaska Vacation in One Minute

The journey from the lodge to your fishing destination is half the fun. A day of fishing at Crystal Creek Lodge offers some of the most spectacular fly-fishing and scenery in the world.

Alaska Rainbow - Photo of the Week 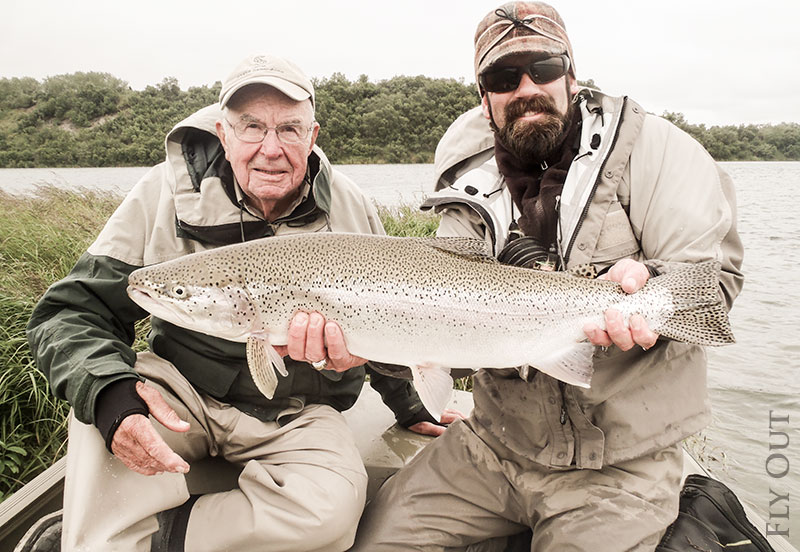 Take Action for the Tongass
© 2019 Alaska Fly Out