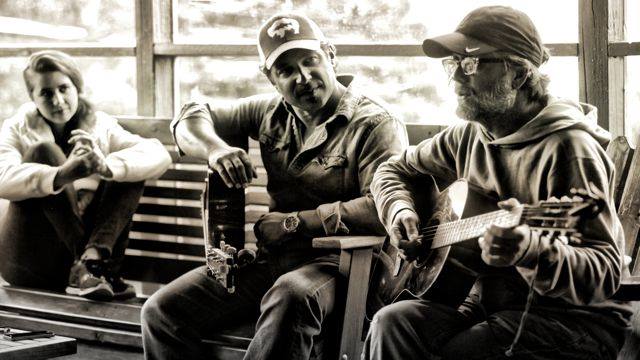 The Artist-in-Residence program was created on the premise that every one is touched by art, but few have the opportunity to witness it's creation, or have meaningful conversations with those who produce it. The idea is to blend fly fishing and the arts in an Alaskan setting; to expose the lodge's guests to writers, poets, painters, print makers, photographers, song writers and musicians in a manner that enriches their experience and encourages them to support the arts.

If you have questions, or have an interest in joining us, contact Bristol Bay Lodge here

Fishing the Springtime Smolt and Fry Migration in Alaska 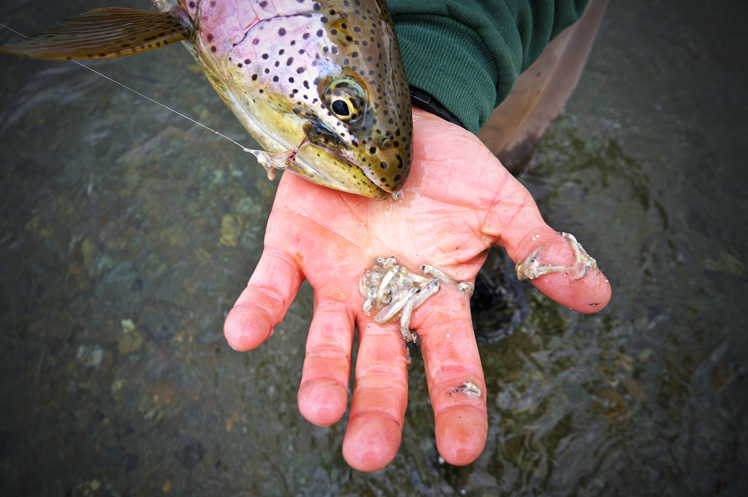 Recently I had a discussion with a good friend of mine, Anthony Carruesco, regarding the unique and exciting fishing that we have each year in Alaska. We both were reminiscing on the springtime baitfish migration, agreeing that it can provide some of the most spectacular fishing for the big red-sides of Alaska. 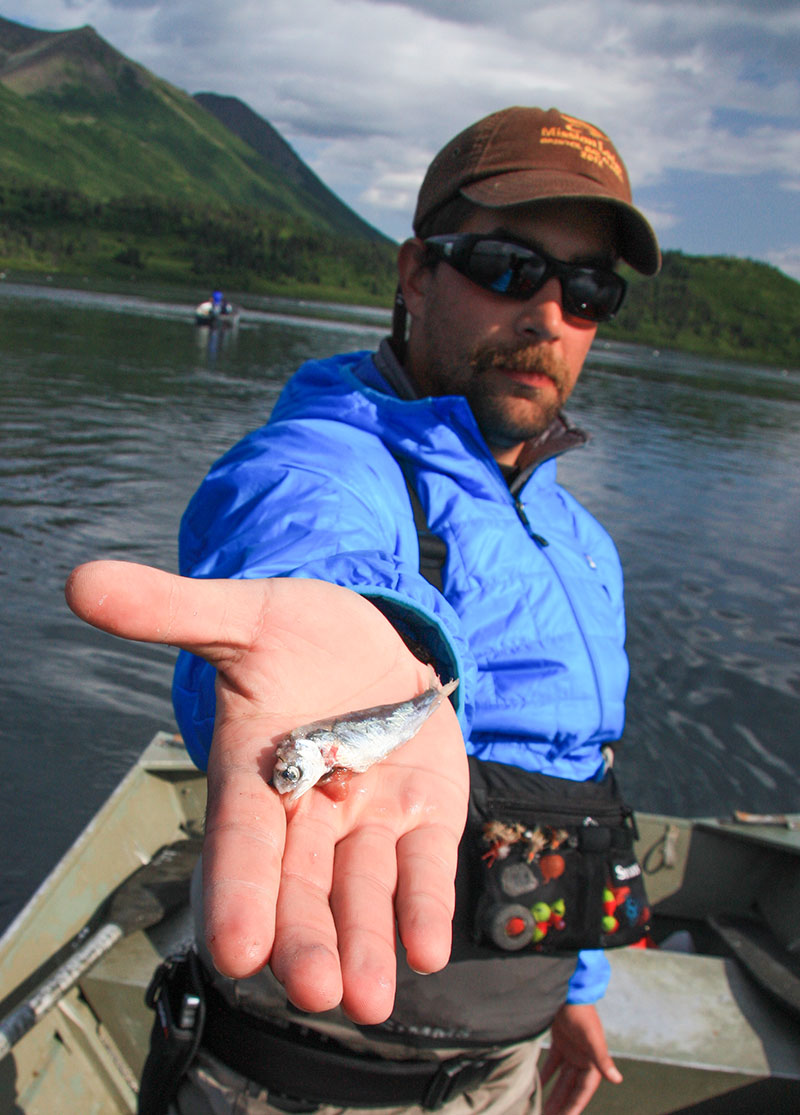 Every river that has a salmon run, will also have a baitfish migration at one time or another. Specifically, river systems with heavy sockeye salmon returns provide some of the greatest near surface streamer fishing found anywhere in the world. As the snow melts, and spring starts to become summer, the fragile aelvin stage salmon begin to take shape. Now considered "fry," they move from their natal hatching grounds towards the lakes where they will grow before migrating to sea.

Not only do the fry stage salmon move during the Alaska spring, but various species of salmon "smolt" also migrate towards their salty feeding grounds, where they will spend a few years growing before returning back to their home water to spawn. Depending on the species, the "smolt" will vary in size and coloration, but in general they are larger than their "fry" cohorts.

Getting your fly hammered by trout that are acting more like a school of saltwater tuna is some of the most exciting trout fishing on the globe. Soft hands need not apply as there are no soft strikes here, every fly gets hammered, nearly pulling the rod out of your hands every single time. At times it can be slow, and patience is a must. But if you are positioned correctly, and the fish gods smile down upon you the way they sometimes do, you are in for the ride of your life. 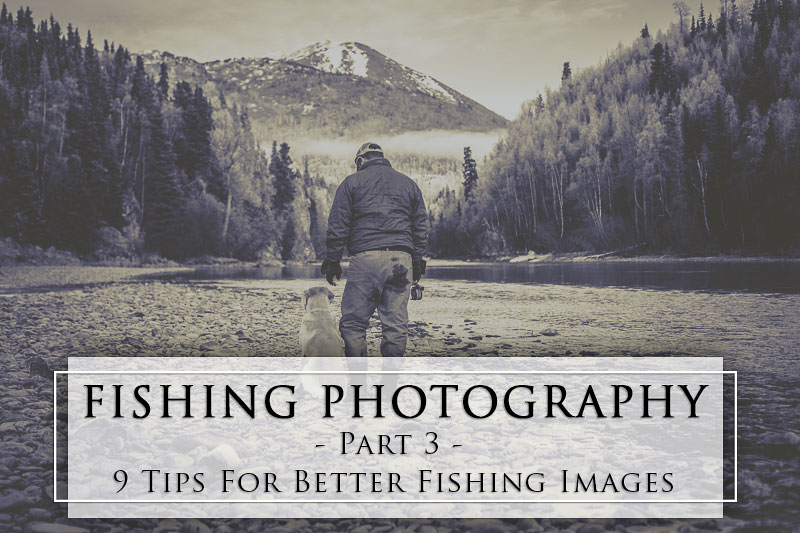 Growing my skills in the field of photography has been a passion of mine for many years now. We fly anglers are so fortunate to be surrounded by such relentless, awe-inspiring beauty. For this reason alone, I like to pick up a camera almost as much as I do the rod. Throughout the years, I have learned a lot and have realized a few common tips that really helped improve my imagery.

Look at the big picture
When searching for that perfect shot, I always make sure to try and capture the scale of where I am fishing. One of my favorite methods in doing so is by stepping way back with telephoto glass, allowing the lens to pull the angler and their surroundings into perspective. It's amazing how background objects like trees or mountains are pulled into the frame, allowing the viewer to grasp the full scope of the environment.

Channel your inner Miss. Cleo
After spending years on the river, anglers begin to almost develop a psychic sense of what a fish is going to do. Most of the time this very unique skill is used to help land a fish more efficiently. Not only is this trait ideal for fishing, but as a photographer this trait can be used to predict special moments throughout the day. Acrobatics, blistering fast runs, and the look of despair on your buddies face when he's been manhandled all have an air of predictability when one is channeling their inner psychic. Make sure you're ready.

All in the details.
Macro photography is yet another way that we can change the way our sport is viewed. Instead of grabbing large scale images, stick to the specifics. Scales, fins, and eyes, all are intricacies that are unique to fishing. Capture the details and give focus to another level of beauty. 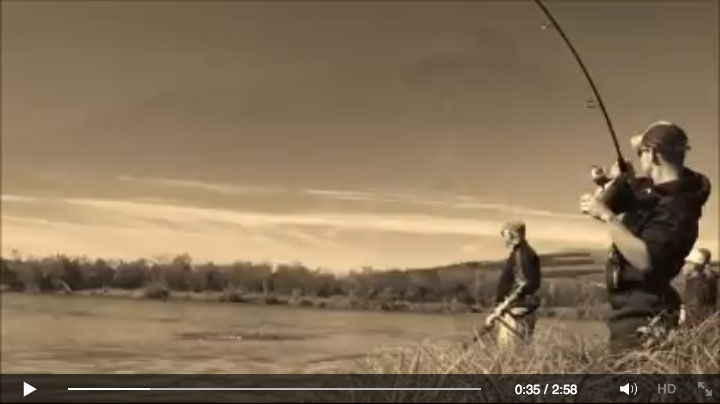 Captain Landry was hard at work this past summer guiding flying and filming at Angler's Alibi. There really is some unique footage here, showcasing the incredible salmon runs and wildlife on the Alagnak River.

On a side note: For all those aspiring drone pilots, let's be respectful with these flying/photography tools so that we can continue to use them. 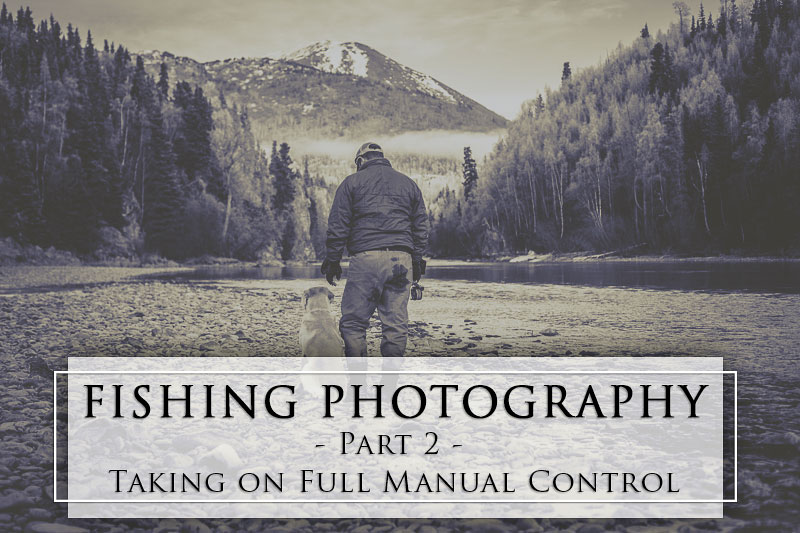 I think taking on full manual control of a camera is a goal for any aspiring photographer looking to improve their skills. While it is very intimidating at first, learning manual control can be taken one step at a time through the use and understanding of the camera’s preset priority modes. In the last “Behind the Lens” article we discussed choosing the proper lens for your fishing photography. Building on that, I will briefly discuss using priority modes in preparation for takingon full manual control of your cameras settings.

Outside of full manual control, using your cameras shutter priority mode (“S” on Canon or “Tv” on Nikon) is the best way to learn how to control the amount of movement and/or blur produced in your final image. Here, your camera allows you to choose the desired shutter speed, while it takes control of the remaining ISO and aperture settings. When trying to capture fly line in flight, or a fish doing mid-air cartwheels, you will find that cranking up the shutter to the maximum possible speed is necessary to get a sharp, clean image. While this is not exactly rocket science, it is necessary to understand completely. I can hold my camera steady at a shutter speed of 1/60th or faster by hand, but if I need to shoot any slower, a camera support is necessary to avoid blur in the final image.

The downside to using the shutter priority mode lies in the photographers inability to set the desired depth of field. Keeping this limiting factor in mind, I always enjoyed experimenting with the shutter speeds when trying to capture a fly line in flight. I would start at a low shutter speed, and continuously analyze how “frozen” the line and angler were as the speed was ramped up. Over time I realized that sometimes a little blur is a good thing, giving the image a sense of movement and action that a completely still frame does not have.

1 Year After Disaster, Intricate Bay Lodge is rebuilt and ready for fishing in 2015

After a devastating fire consumed Intricate Bay Lodge a year ago, the eight owners decided to lick their wounds and go for the impossible: design, fabricate, ship and build a new replacement in a single year.

"We knew rebuilding off the grid in just one year would be a huge challenge, especially in this remote part of Alaska, but we were lucky enough to find a great collaborator who could fulfill our wish list", said Brian Harry, owner and manager of Intricate Bay Lodge.

The reincarnated lodge, erected on the same location, incorporates dozens of improvements suggested through the accumulated knowledge of many fishing expeditions. Guests will have spectacular views of Lake Iliamna, short boat or float plane rides to Alaska's unparalleled fishing, meals from the new gourmet kitchen, and a new hot tub to relax muscles worn from handling large fish.

"Since this is a small-scale, remote, off-the-grid, commercial fly fishing lodge in Alaska, every design choice was critical – driving cost, functionality and the business model itself," explains Harry.

"We are very grateful to the community for their help and support throughout this process. We're updating our IntricateBayLodge.com site, and are once again booking reservations. The lodge will operate for years and years to come, giving hundreds of people a dream-vacation experience in a very special place."

So this is what I did over this past winter when I was not making people coffee.

It's all time-lapse footage shot in and around Anchorage, Alaska, with the emphasis on the nature around the city rather then on the people and buildings. This is a collection of the nicer stuff I shot of the northern lights, stars, sunset, and the tide. All of this was shot between October 2011 and April 2012.

Simply put, a father and son's journey into becoming fly fishermen. Beautifully done, and what a fantastic way to spend time together. Makes me yearn for my youth again.

When you teach a kid how to fish, you inherently teach them respect for our fisheries and natural world. Alaska is a great place to start.