When chasing down your 30 inch rainbow trout, head toward Alaska's "Big 3." 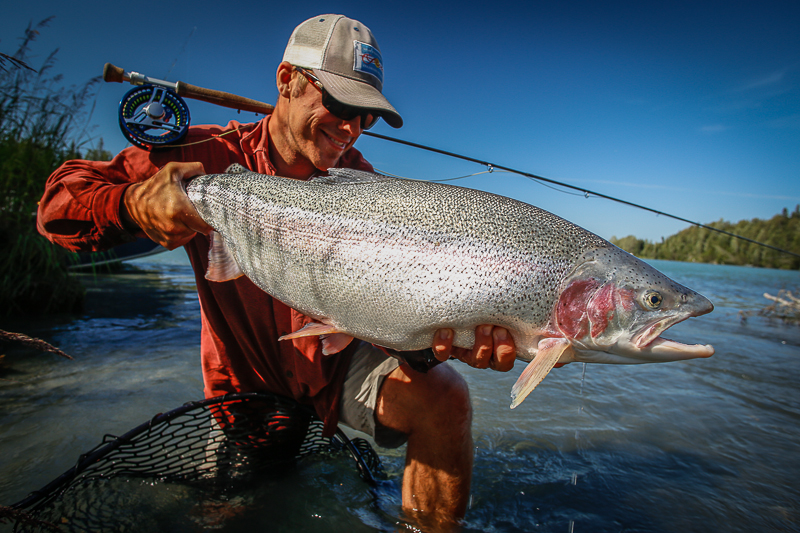 Each year thousands of anglers board a plane chasing the bounty of 49th state, taking a shot at hooking into the rainbow trout of their dreams. While other foreign destinations such as Russia and Argentina may produce some big fish, there is no doubt that the accessibility and accommodations of our Alaska fisheries, in combination with the wide array of time periods, make Alaska a very easy choice when you decide on where to go to hunt for your Troutzilla.

Similar to other waters throughout the country, Alaska has a benchmark length that is considered the "trophy" designation. In Alaska this mark is usually set at an astounding 30 inches. While there are many factors that come into play when embarking on this quest, the first step to improving your odds is choosing the right river system to target.

Prime dates on these rivers fill in fast, so anglers heading out would be well advised to call, and book their trip early.

Kvichak River
Located about 250 miles southwest of Anchorage flows the crystal clear waters of the mighty Kvichak River. The only connection between Lake Illiamna and Bristol Bay, the river boasts an insane amount of salmon return. For the angler, this means a huge plethora of biomass for trout to munch on throughout the year. In addition to the salmon numbers, gigantic Lake Illiamna provides the resident trout an all-you-can-eat buffet of salmon fry and smolt, allowing the trout to feed effectively year round. 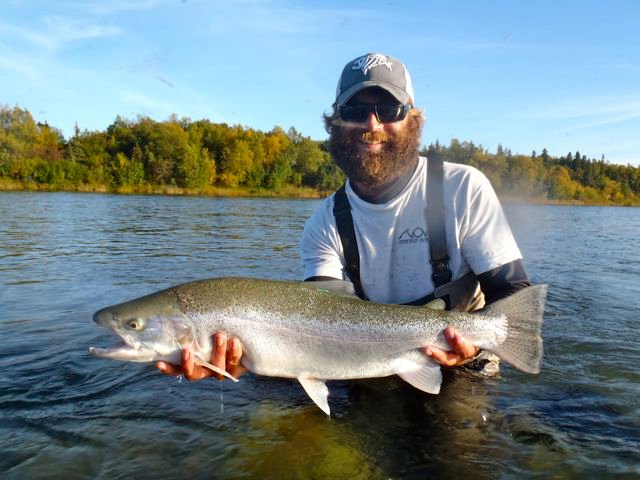 In the 50 miles of river, the Kvichak takes on many forms. Starting as a deep, channelized river near the lake, it transitions into a large braided system before again channelizing near tidewater. The trout fishing area on this system is generally focused in the area from the braids up to the lake.

June on the Kvichak marks the opening of trout fishing in the Bristol Bay area, and can provide some ridiculously exciting fishing. The springtime post-spawn fish are hungry, and the outmigration of both salmon smolt and juvenile lamprey eels are prime targets. While this migration exists, it is not as explosive as the other 2 rivers, and spring time is more focused on both old flesh and swinging big leeches. Spring on the river can deliver some exciting takes on the swing, and is a great time to find your trophy trout. 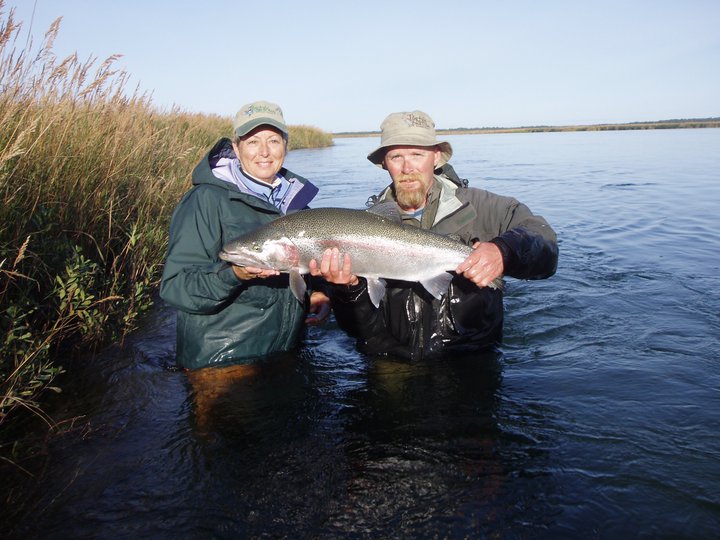 The never ending daylight hours of late June and July mark the arrival of the sockeye salmon. During the peak of the run, there can be as many as 30,000 sockeyes pushing up the river every hour. As these fish transition to spawn, the trout feed full throttle, taking in all the protein they can during this short seasonal window. This spawning period will lure the big, hard fighting, chrome-bright, resident trout out of the lake system to feed. A dead-drifted egg pattern during the spawn is generally the go-to technique for this time of year.

August through October is considered the best time to put your trophy to hand. As fall quickly approaches, the trout are still feeding with ferocity. Swinging leeches and large flesh patterns can produce some massive fish to the angler willing to put in their time.

Naknek River
Just a short flight from the Kvichak, the "short-but-sweet" Naknek River is another leg of Alaska's "Big 3." This 35-mile long river system flows west from Naknek Lake into the waters of Bristol Bay. Also known for it's massive sockeye return, the lake fed Naknek offers many of the same fish producing qualities and fishing techniques of the Kvichak, producing monster trout. 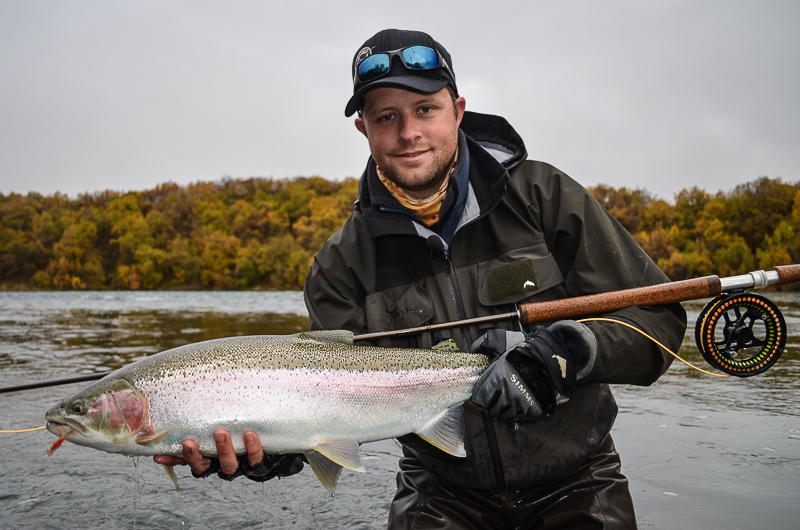 In the month of June, the fish will feed ferociously on migrating juvenile salmon, as well as leeches and eels. The mouth of the river at Naknek Lake acts as a funnel, directing all the baby salmon of the Naknek Lake watershed towards the ocean. Here you will find the massive chrome trout waiting in ambush position, ready to partake in the feeding frenzy that will surely ensue. When this out-migration happens, the river seemingly erupts in a whirling fury of slashing trout. The fish act more like ocean tuna than a riverine rainbow. This window can be short, but if you hit it right, there is no rival to the excitement of swinging a baitfish pattern to surface-cutting monster trout. 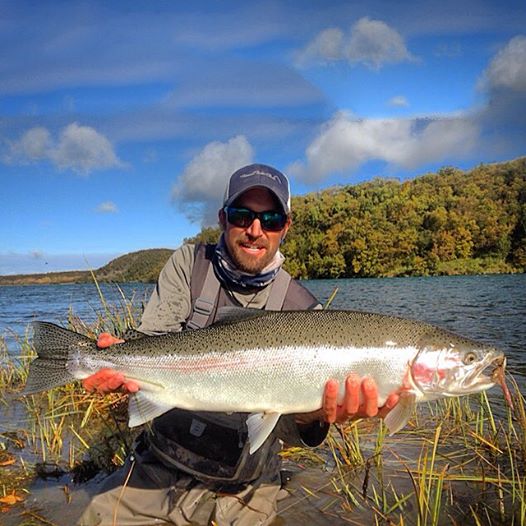 The end of June through July marks the return of the sockeye salmon, pumping out as many as 20,000 fish per hour passing by your feet. This influx of biomass makes causes the trout to lose their mind in anticipation of the spawn, taking egg patterns at will.

As we progress into fall, the prime time for trophy trout approaches. The large lake-run trout move into the Naknek's flowing waters, feeding on anything they can get their fishy lips over. Gravelly runs littered with boulders, pockets, and edges, offer prime spey and single hand swinging water throughout the fall.

This river produces some impressive fish, and like the Kvichak, it is fairly limited in the amount of angling pressure. If you are a fly-swinging addict like myself, the Naknek needs to be on your list.

Kenai River
The only one of the 'Big 3 to be on a road system, the glacial blue waters of the Kenai is the final member of these elite rivers. This aqua colored gem, flows through two large lake systems (Kenai and Skilak Lake), before hitting the salty waters of Cook Inlet 82 miles later. Because it is accessible by road from the states largest city (Anchorage), there is no doubt that the Kenai receives more pressure than the Kvichak or Naknek Rivers. That being said the Kenai has its very own special brand of beastly rainbow trout. The fish here seem to take on a much heavier body shape than those of their western cohorts. This may be due to the extended feeding period of Kenai fish, as I've personally witnessed salmon swimming in its waters 11 months out of the year. 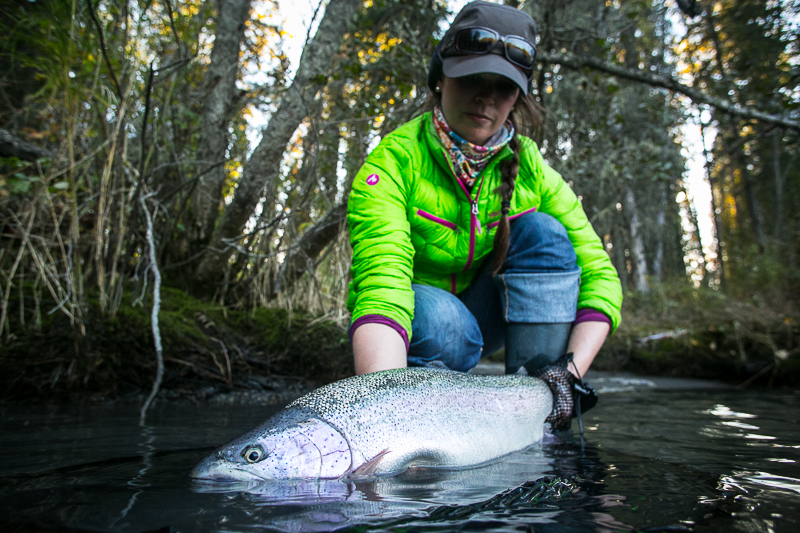 Also unique to the Kenai is the variety of river characteristics it takes on during its path to the salt. The smaller braided waters of the upper sections transition into deep swift runs further down river, and anglers can choose the type of fishing that they prefer to take part in. The smaller waters of the upper river are perfect suited for walk and wade fishing, while the deep and long runs of the lower sections are more productively fished out of a boat.

Similar to the other two rivers, springtime on the Kenai kicks off the post-spawn madness as the salmon fry/smolt migration begins. Fish feed aggressively this time of year. Swinging baitfish imitations and articulated leech patterns are the methods of choice, producing some thundering grabs. 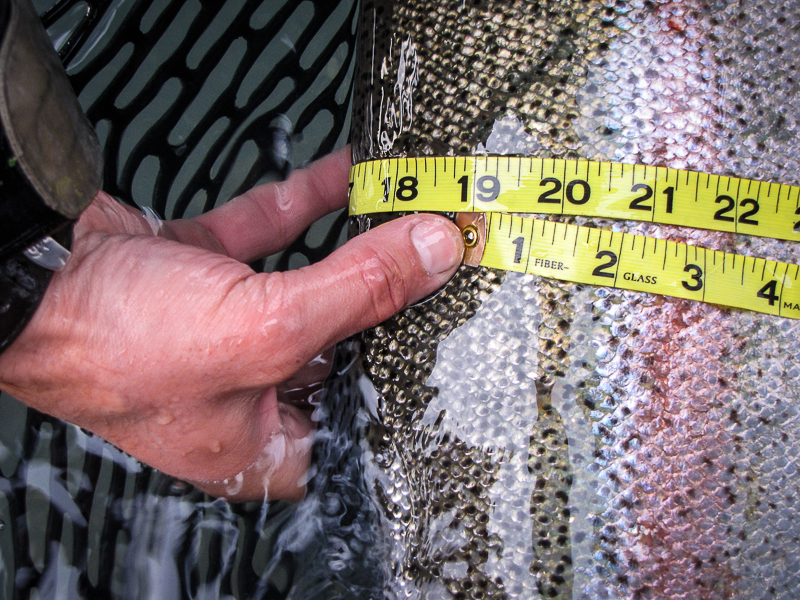 Come July, the Kenai is flooded with sockeye salmon and the fish begin to feed more heavily. Due to the higher user volume on the Kenai, the harvest and fileting of sockeye produces an intense flesh fly bite, which can last for about a month.

Yet again, September through October is when the larger trout begin to put on their feedbags. Due to the diversity of salmon species that spawn in-river, the variety of productive fly-fishing methods is astounding. Whether you want to swing flesh, throw leech patterns, or dead drift eggs, the choice is yours.