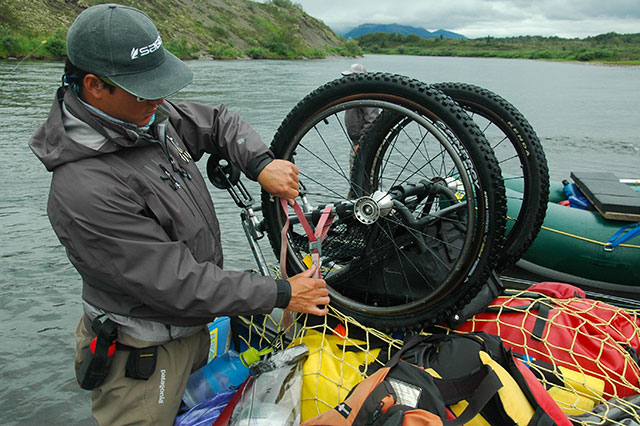 A week on the Togiak River with Warren MacDonald, who fly fishes from his wheelchair, and with Nick Watson – disabled Army Ranger / founder of Veterans Expeditions, and Dick Watson, his father – a Vietnam Veteran.

From the trip log: "Some hours we passed through schools of salmon and Dolly Varden Char and other hours we fished through a pristine river devoid of fish but full of beauty. We travelled in all kinds of weather and that felt like we were earning our place among the wildlife on the landscape, as only those who live exposed out in the elements, can earn their passage. Some days we saw a powerboat from a fishing lodge or from Togiak Village, and they gazed at the wheelchair lashed on our raft and raised a hand of greeting.

I knew within seconds of meeting former Army Ranger Nick Watson that his outlook on life and his good attitude about challenges would help make our fly-fishing expedition a success. As he deplaned in Dillingham I reached out to shake his hand and was amazed at what he handed me! Oops I should have remembered that it was his right hand that had been re-shaped by 6 surgeries.

The partial hand that returned my handshake was strong and calloused and the human face above it smiled saying that he was pleased to meet me. His father, Dick Watson, reached out and crushed my hand saying that he'd fished for Striped Bass all his life in New England and was excited to learn to fly fish with his son for salmon and trout.

Down the hall rolled our third angler, Warren MacDonald on an all terrain wheelchair. Warren is a "double- below the knee- amputee". He had a big grin upon arrival and while we headed to the baggage claim I told him that I was surprised at how he'd deplaned so quickly. I couldn't mentally grasp how he'd descended Dillingham's old-fashioned aircraft stairs, which are like those used on DC 3's in the 1950's, as fast as the other passengers. He explained in a very understated manner that he appreciated the flight crew's offers of assistance to transfer him to an aisle wheel chair and help him down the stairs but that he'd maneuvered down the aisle and then the stairs using his arms, torso, and the stumps of legs. He said it takes him more time explaining to various airport agents how he could manage it by himself -than it takes just launching down the stairs.

Read the rest of the trip report!