Alaska Ski Tour in the Wood-Tikchik

Derek Collins and I skied from Aniak to Dillingham through Wood-Tikchik State Park (Alaska). Our route was 250 miles, and it took us 14 days. The highlight of the trip was ice skating ~50 miles of the route on nordic skates. We were stomped by a storm the entire second week.

Earlier this winter Joe Stock proposed we do a fly-in ski traverse of the Wood-Tikchik mountains in Southwest Alaska. The Wood-Tikchiks are a freshwater fjord system, big mountains to the west, U-shaped glacial valleys (the lakes), and rolling hills (moraine) to the east. I was really excited to do another trip with Joe because I can learn so much from him. After scoping the area in Google Earth, I was really impressed with the 4000-ft relief, granitic and glaciated, at the northern end of the mountains, so I proposed we fly in for steep skiing, then tour out to Dillingham. At the last minute Joe had to bail, and without him there was no funding to fly in.

I met Derek Collins a few years ago when he came to the Brooks Range for the Winter Classic. We didn't travel together, but Thomas Bailly and Roman Dial were really impressed with him. Early in the course Roman borrowed one of Derek's ski poles and accidentally broke it. Derek just shrugged it off. Since hearing that, I've invited him on a number of trips, but living in Jackson Hole with two kids, he hasn't been able to make other trips.

Derek was particularly interested in this route because he spent 6 years growing up in Aleknagik, the village at the southern end of the Wood-Tikchik lakes, and Dillingham. We discovered an almost spooky number of similarities. Derek moved to Aleknagik at age 4, from Salmon, Idaho. I moved to McGrath (up the Kuskokwim River from Aniak) at age 4, from Missoula. He moved into Anchorage for 4th grade, I moved in for 8th. We are both quiet, a little socially awkward, and uncomfortable with the party scene. It gets even weirder... our older brothers, Dirk and Burke, are both pro videographers. Dirk was a co-founded of TGR, now sole owner of One Eyed Bird, and Burke has Things to Look At. It was fun thinking of what project they would put together... Girls Gone Wilderness? 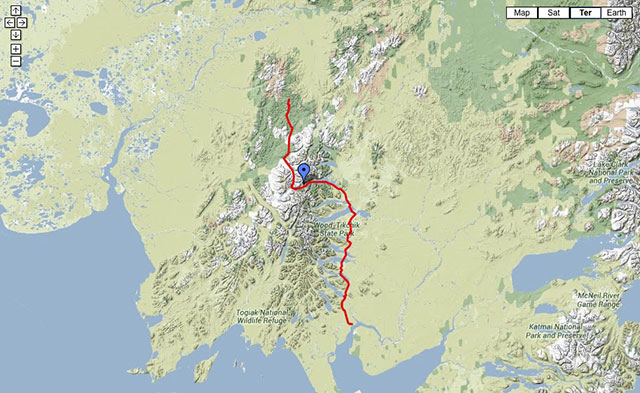