Clean water, picturesque backdrops and splashy rises. Can it get any better? 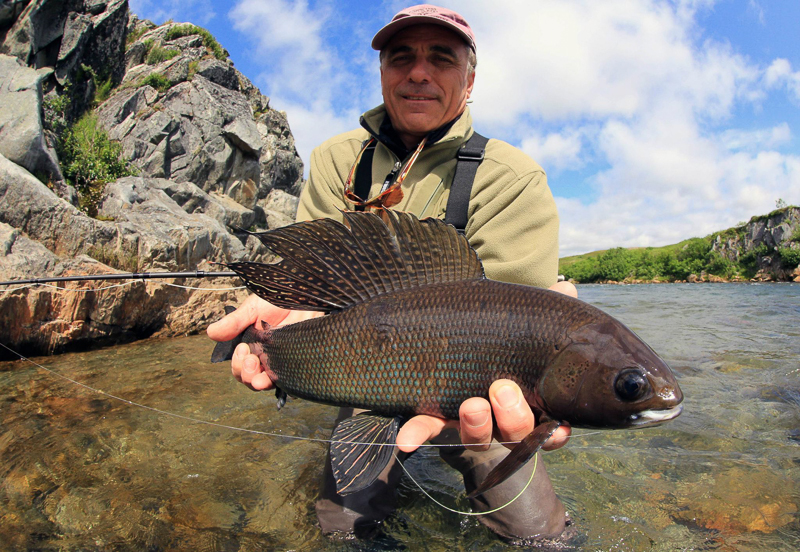 It is said that some fish only live in beautiful places. No species in Alaska represents this dictum more than the iconic Arctic Grayling. The clean, cold water that tumbles from glacial peaks sprawls throughout Alaska's immense wilderness, providing both the ideal habitat that Grayling require, and an incredibly picturesque background for the pursuing angler.

Unfortunately, Alaska's spectacular Grayling fishery is often overshadowed by larger, hard fighting species like salmon, char, and rainbow trout. Sure, Artic Grayling are not huge or overly powerful, but what they lack in size they more than make up for in simple beauty, and eagerness to take a dry fly with reckless abandon. For these reasons, we simply had to list them on our Top 10 list of fishing goals to accomplish in Alaska.

The Fish
The "Arctic Grayling" or Thymallus arcticus, is notably one of the most beautiful fish that can be found in Alaska. They are most commonly known for their large dorsal fin, which resembles that of a Sailfish. This large telltale appendage is often fringed in red and covered in a mosaic of iridescent orange, blue, or purple spots. Individual body coloration can vary from stream to stream, but typically Grayling are shrouded in indigo blue or deep purple. This is especially true of the males during the spawning season, as their complexions intensify in order to attract females.

Surprisingly enough, these fish can live up to 32 years, with most falling into the 8-18 inch size category. Any fish over 18 inches is generally considered trophy in most areas, with 24 inches and 5.1 pounds setting the mark as the largest Grayling ever being recorded in Alaska.

When
Because Grayling are such opportunistic and agressive feeders, they can be caught throughout the entire season. As the summer progresses, so do their movements throughout the watershed. The large, mature fish tend to occupy the cooler reaches of the headwaters, while the sub-adults are exiled into the lower sections of the river.

The Range
In Alaska, Grayling have the largest natural range of any sport fish, occupying nearly the entire state. In fact, the only place that they are not found is on the Aleutian chain, Kodiak, and the islands of Southeast Alaska.

The Techniques
Because Grayling are such voracious predators, the style of fishing is really up to the angler. The majority of fishermen choose to employ dry flies, often times finding non-stop action. Elk Hair Caddis, Adams, and various terrestrial patterns are among some the favorites that can be found in the fly boxes of many Alaskan fishing guides. A perfect dead drift is not always necessary, and often times a skated fly can make for some very exciting fishing. Grayling have even been known to take down mice and voles at times in an effort to pack on the pounds before the long winter.