We have been flying camera mounted UAVs since 2013. Believe it or not, that was before drones became the widespread consumer item that they are today. These crafts were tough to fly, and the camera stabilization was not easy or affordable. Throughout, we've worked closely with Quadrocopter, LLC to find professional UAV solutions that fit our unique needs in Alaska.

UAVs offer an incredible perspective for a filmmaker, opening the door to many innovative shots that had never before been possible for small scale production. This is a short reel, showcasing our aerial videography in Alaska over the past 4 years. 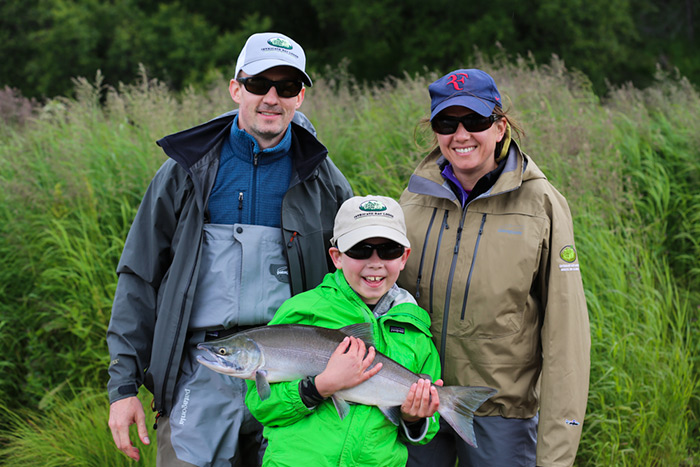 Intricate Bay Lodge is offering a limited time discount for kids at 50% off for all weeks in July. See the following package details:

Fly Out Package - $7750 Per Person All-Inclusive

Included: 6 nights lodging and 7 days guided fishing including 5 days of fly out fishing and 2 half days local fishing (half day = 6 hours on the water).

Included: 6 nights lodging and 6 days guided fishing 3 full days fly out fishing 2 full days local fishing and 1 half day local fishing (half day = 6 hours on the water). A perfect combination of fly out and local fishing.

Included: 6 nights lodging and 5 days guided fishing. Access the world renowned Copper and Gibraltar rivers and many smaller stream in the Iliamna drainage by jet boats and our 23 foot cabin cruiser.

A Day at Kulik Lake in Alaska's Wood-Tikchik State Park

We spent a day with Royal Coachman Lodge on nearby Kulik Lake to take in some remarkable Alaska scenery and to catch a few early season fish. This has got to be one of the most scenic spots in all of Bristol Bay. It's stunning how the Wood-Tikchik Lakes intertwine and collide with the dramatic Wood River Mountains. A fishing trip in this region offers so much more than fishing. Watch in HD - Comment, Share, Enjoy

If you've never seen the grandeur of Alaska's landscapes, this short will give you a small glimpse of the mind bending wonders that make up "The Great Land". The scale is unfathomable, the beauty is divine, and the wildness is inspiring. Watch in HD - Share, Comment, Enjoy!

Grayling will eat mice too!

If you've ever been fly fishing in Alaska, you have most likely encountered Arctic Grayling. They are abundant in many of Alaska's remote rivers. In some areas, they can grow to be over 20-inches in length. Their iridescent colors and feisty demeanor really make them unique. If you like throwing dry flies, it's hard to beat the action you'll see with Arctic Grayling.

While shooting Mighty Mouse II in Western AK, we captured dozens of Grayling takes on camera. And, since we felt like waltzing, we thought we'd put together a short reel. Watch in HD - Comment, Share, Enjoy!

Alaska's Grand Slam on the Fly

Variety is the spice of life they say. There's very few places on planet Earth where you can find the type of fish variety that you can in Alaska. We've counted 12 different freshwater species that you can catch on the fly - King Salmon, Chum Salmon, Silver Salmon, Sockeye Salmon, Pink Salmon, Rainbow Trout, Arctic Char, Dolly Varden, Northern Pike, Sheefish, Lake Trout, and Arctic Grayling. Did we miss any? The Alaska Grand Slam is all of these species in a single fishing season. Or even better, a single week. Comment if you've achieved the Alaska Grand Slam!